Hey Peeps, Today I want to share a new release from the author Lizabeth Scott.

Sweet Temptation
Sweet Temptation is the fifth installment in Lizabeth Scott’s Royal Vow Series.
Giving in to one simply divine temptation changed the course of her life forever. Chellie’s world spiraled out of control, and she had no one to blame, but the one man who lied and betrayed her. Her one night of unrivaled passion became the worst and most cherished moment of her life.
Prince Siran SuMartra stood fourth in line for the throne. Nothing was expected of him, and that’s exactly what he delivered. The image he put forth to the public was becoming tiresome to maintain. When he woke disorientated in yet another strange bed, with a woman he couldn’t remember, he knew it was time to change and take his place beside his brothers.
Years later, two very different people come together and discover they’re bound through a common bond. Prince Siran sets out to make amends. Chellie knows putting her trust in him again would only lead to another sweet temptation.

It's going to be available Monday, 4th January, 2016 on all platforms.

Amazon, B & N, Kobo, Smashwords, iBooks. So stay tuned for the links! You can sign up to my email list, and receive details of special offers and freebies!
www.julienicholls.com
SIGN UP

Blood Ties is a paranormal/shifter/romance story.

Sweat ran down Keagen’s muscular back as he pressed the female against the wall. His rock-hard body, with perfect proportions and stamina that would outlast a stable of thoroughbred racehorses, was nowhere near to flagging. He’d pounded the woman for the last hour, nonstop. The female on the receiving end of his attention cried herself hoarse more than twenty minutes earlier. She needed to rest, but large hands cupped her ass, supporting her weight, and only when he’d had enough would he let her down.
With the air-con turned up high the smell of fresh sweat and sex hung in the air. Keagen loved to fuck; he had some catching up to do after his sex-starved existence for the first part of his adult life. Puffing out a few quick breaths, he built up his pace. He was ready for a beer and wanted the woman out of his room.
Keagen was tall, muscular, and stronger than most men were, although he wasn’t exactly a man. His genes were human DNA with a hint of animal, courtesy of Solgen Laboratories. It wasn’t common knowledge what the company did, and their labs were all in secret locations. Only their financial backers knew where they were. Who supported them was unclear. Possibly the government, private military organizations, or even wealthy dictators; no one knew. You would not find any documentation about it. It wasn’t legal what they were doing, that’s for sure.
Keagen tracked and hunted escapees and always caught his prey, but just one eluded him, and it pissed him off. Nevertheless, he was closing in, and soon he’d return to base with his prize in tow. Given free reign to come and go as he pleased, Keagen enjoyed the freedom, and as long as he brought in the bounty, all was well. Sometimes out in the field for days or weeks at a time, he upheld contact by phone; a check-in, but he wasn’t worried. Sometimes he needed ‘Keagen’ time. Holed up at his secret hideaway, or a motel, where a steady stream of females frequented his room, he could easily fob off his supervisor. The geneticists made the mistake of giving him just a little too much intelligence. Consequently, his IQ already rivaled some of the top minds in the world, and he was smart enough to hide that fact from his testers.
Grunting and hissing through gritted teeth, Keagen screamed his orgasm as he fucked the flagging woman; those last deep thrusts into her satisfied pussy filling the room with a guttural cry. Throwing his head back, his wet hair slapped against his shoulders. The muscles in his thighs held the female firmly against the wall for a few moments until his hips finally stilled and finished jerking. Catching his breath, he rested his head against the cool plaster before releasing the sighing woman. As she tried to stand her knees buckled, but he quickly scooped her up and laid her on the bed.
Meet Gabriel - Lycan

It was quiet in the smoke-filled bar. Just the gentle humming from the waitress broke the silence. Drew’s was a rundown place where the locals piled in after work. Mostly hanging out for just a few drinks to wind down before heading home, they used it as a stopgap, preparing for more stress from either home life, or a second job. There were the regulars who propped up the bar day and night. Jack, one of the old-timers, spent all his time drooling over the young women as they tended bar. Occasional delivery trucks would hole up in the parking lot and the drivers would drop in for coffee, just to keep from falling asleep on long hauls. Smokey and dark, subdued lighting with wood paneling covering the walls and an unvarnished wooden floor, it was a place to relax and ponder.
Gabriel was a regular and sat at the end of the bar in his usual place. From his vantage point, he could view the entire room. He didn’t have children or work to unwind from, but still enjoyed a cool beer. Without turning his head, the washroom and entrance were all visible. He could see everyone come and go with ease. Sitting quietly, he’d listen. Unless someone started the conversation first, he’d barely speak, but take in everything.
The quiet town appealed to Gabriel. Moving here just over a year ago, he settled in easily and found a place to stay. After renovating a cabin just on the edge of town, it gave him the seclusion he desired. He could take a short drive into suburbia and have everything he needed before returning to the solace he preferred. He kept to himself and avoided confrontations. Causing trouble wasn’t in his nature. However, he came over as someone who didn’t take crap, and he would let small annoyances slide until he reached a breaking point, then you didn’t want to be around to see the fall out. On a few occasions, Gabriel let people know he wasn’t someone they should fuck with, earning him respect shortly afterward. In sleepy town bars, there’s always someone dropping by to stir up the calm. Stepping in to deal with troublemakers made him the resident bouncer. There was never any exchange of cash; he didn’t need a regular job. He just did it. Drew made sure he never went thirsty and all drinks were on the house for keeping the place brawl-free, which suited Gabriel. The more beer, the better, and he didn’t like having his peace and quiet disturbed; it was a win-win situation.
Watching Lyssa brought out his more human characteristics; he’d not always had those. A year ago, he was nothing more than a caged animal. He tried not to think about the past, but occasionally something would trigger his thoughts.
Taking a mouthful of beer, he watched everyone and everything. Casually watching Jack eye up the sweet piece of ass, he grinned. He’d been close, and was still working on getting closer. Never short of female attention, Gabriel made up for lost time as soon as he broke free from his captors. There wasn’t a huge choice of pussy in Dewburn Falls, but quality, not quantity was the issue here. Lyssa would succumb to him, eventually. Women couldn’t resist him. He was astounded she’d lasted this long; he had a feeling she’d be worth the wait. Continuing his advances and hoping for a victory soon, Lyssa proved an interesting challenge.
He wasn’t sure if it was luck, or fate, that brought him here, but finding two female lycans was a surprise. Taking a drink, he smiled as his thoughts turned to Sally. He’d been in town only two weeks and gotten lucky with her.
One down…

Artwork by yours truly.

I make covers and banners, so please don't hesitate to contact me should you require my services for your next book. My rates are very reasonable!

Contemplations: Welcome to Marvelous MondayToday's post is from J...

Check out the cover for Blood Ties! A new #PNR #shifter #romance #trilogy coming to you January 4th 2016
Posted by Unknown at 02:47 No comments:


Check out my site, you can see snippets from all my books, and future series.

I am very excited right now. Scott Richard Ehredt who recored the audiobook Demon Within , is now ready to start work on the next book in the series, Angel Within. 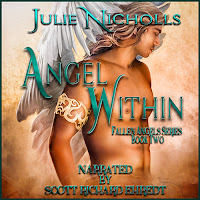 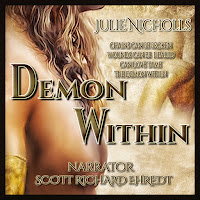 I have to confess I have been pleasantly surprised with sales of the audiobook and didn't realise how popular they are. I believe I've found a new way to 'read' while I'm working

Check out the link and listen to the sample for Demon, you will be amazed!!

Don't forget you can hear all samples, see video's of trailers and get the synopsis of all my books on my official site julienicholls.com. I have a special freebie for anyone subscribing - a free download of FANTAZIA

An 'AWESOME' review for Demon Within, first book in the Fallen Angels Series by Rainne. You should chec out her blogs for other reviews. She's a passionate reader!

https://rainne15.wordpress.com/
Posted by Unknown at 02:00 No comments:

These are a few of my favorite things